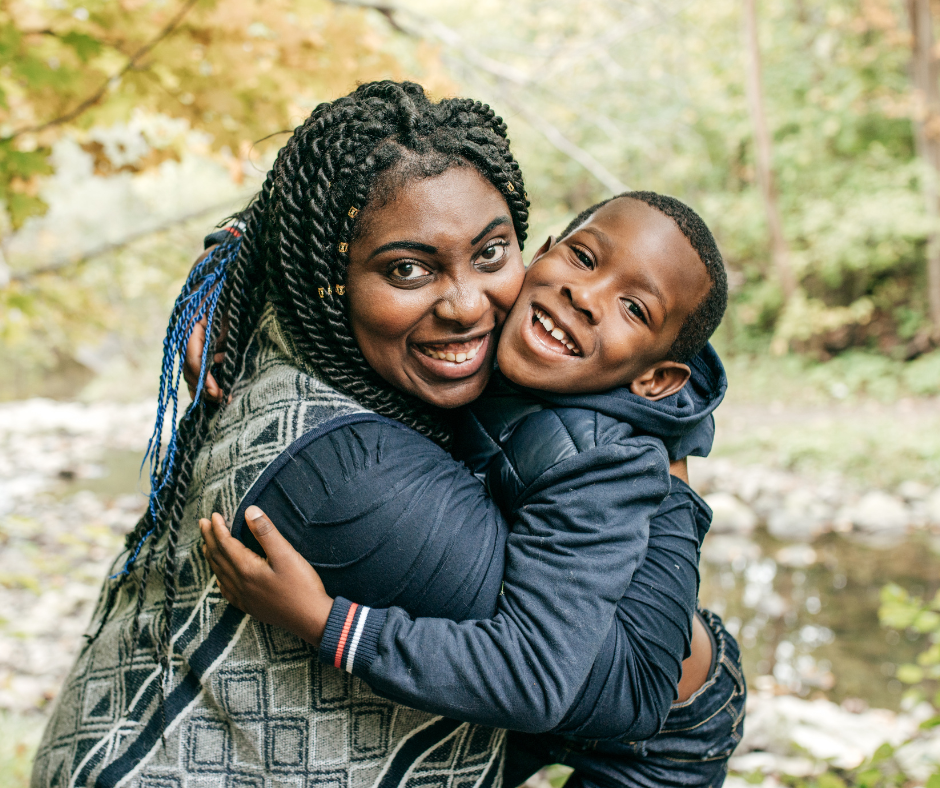 If there’s one thing I know about parenting on the spectrum, it’s that structure is sacred.

Things go so much smoother when we have a plan and a schedule set into place. We use picture schedules, timers, and all kinds of really awesome tools to maintain structure and keep our kiddos from the chaotic feeling of not knowing what will come next.

While structure is awesome and is definitely worth implementing overall, I always caution the parents I work with to avoid OVER-structure.

This is when our lives are based around the clock and what the schedule can afford us. Then we tend to feel a sense of dread if we have to go off the schedule and we’re not able to fulfill our child’s sacred routine. This causes stress and anxiety in any household.

Truth is… we can’t control life sometimes! Weather dampens our plans, things come up, appointments run long. places are closed even though on Google, it said they were open. Stuff happens!

These are the times when it helps if we have plenty of practice in flexibility.

If there’s one thing I LOVE to work on with kiddos, it’s reinforcing flexibility and tolerating changes within their schedule. This is a life skill, one that is often overlooked because it seems abstract and it seems like something that we all just develop over time. The problem is, not all of us do. If an individual is on the autism spectrum, tolerating changes in routine takes a lot of practice. It’s hard to expect a person to automatically have the ability to go against the plan when it hasn’t been practiced first, so we can offer that practice in a low-stress environment to strengthen it for those times when life happens.

Here are some few tips on how to practice flexibility, and spring/summer are the perfect seasons to do it!

When going from one planned event to another, stop somewhere you know your child will enjoy in between. If you’re going from one therapy session to another, unexpectedly run through a McDonald’s drivethrough and get your child’s favorite meal. Be sure to reinforce and give descriptive feedback on this stop. Your child isn’t likely to protest or escalate from this stop, so use this opportunity to say things like “This wasn’t in our schedule today, but it’s so fun! We get to eat your favorite lunch! Surprises can be so awesome”. Make sure to point out that some change is great change, and most change is manageable change. Use really supportive and encouraging language to your kiddos when a fun surprise goes well.

It seems a little redundant, but as you gain progress with it, you can start making some pit stops that are not a sure fire win. For instance, after maybe 3 McDonald’s surprise stops, stop at a Walgreens or CVS. Tell your child “We have to stop here unexpectedly, but if you can stay patient and flexible, we can get your favorite snack while we’re here”. I would buy my son a Hot Wheels car every time we had to make an unexpected stop and he tolerated it (meaning he did not scream, cry or escalate beyond maybe a short vocal protest). Hot Wheels cars were super reinforcing to him and they’re only $1. It doesn’t get much easier than that! I like pharmacies because they’re not quite of a commitment as a large grocery store. They’re small, you can get in and out soon, and they have a lot of the options you’d find in a supermarket. Once THAT starts going well, you can continue to make the pit stops less and less reinforcing, until you’re able to basically stop anywhere and verbally praise your child for their flexibility.

If your child uses a visual schedule, I like adding an icon that’s a question mark or some global icon that signals that it’s unknown what will happen during that period of the day. When we add in a given “unknown”, we are signaling to the child that a time to be flexible is coming up. It’s preparing to expect the unexpected! This helps the child to understand that something that’s not certain yet is going to happen, and it frees you as the parent  up to be able to program the day with a little less rigidity. When introducing this icon, I would start with adding in times that are either preferred or neutral (try not to use the same activity every time to avoid the child thinking that the icon means a specific activity). Sometimes it’s a trip to the zoo (which you don’t want to commit to initially in case it rains or you can’t go for some reason), sometimes it’s a random trip to the park. Sometimes it’s going to a friend’s house. Sometimes, too, it’s something that the child might not want to do, but the rate of reinforcement is so high that it makes it easier for the child to be flexible.

One time I had an icon like this for my son. I left certain time periods open just in case we needed to run an errand or we happened to have time to hit up the playground. It turned out that we had just enough time to go for a walk. It’s not my son’s favorite thing to do, nor do I think he would’ve been excited by the random walk, but he did it because he knew not to expect any particular event. Then I was able to praise him for having flexibility – so that later on, when a day came up that could not be scheduled, I could prepare him by saying “We’re not in our typical routine today, so I will need you to try your best to be super flexible” – and he had a frame of reference for what that meant.

Even though they’re awesome, you don’t always need a super fancy Pinterest-driven visual schedule. Sometimes, you can wing it and draw simple images on a dry erase board, with little boxes to check off when an activity is complete. I actually love using this. I like the imagery behind it – This is our tentative plan, but things are subject to change. I can erase it and put something else. It’s the same as the phrase “I’ll pencil it in”. Very rarely can plans be set in stone. It’s comforting to a child who is routine-driven to know that someone has a plan – even if it changes, someone is strategizing and chaos isn’t certainly upon them. In so many cases, a child who is verbal and understands the visual schedule system is likely to adapt to changes in schedule when they are seeing the familiar adult physically change the schedule as they explain it.

Think about this in more relative terms for yourself. You and your friend are on a road trip. Google Maps says to turn right on the next street. Your friend, who is driving, does not turn right. You get confused – did they not see the prompt to turn? Do they know where they’re going? Are you going to be lost for hours? You’ll probably feel a lot better when your friend says “It says to turn here, but I just took this route not long ago. There’s construction that way. I know a different way that’s a little bit faster”. Even though you’re having to deviate from the plan, you’re going to feel a little better knowing that there’s strategy behind it.

I love programming tiny changes into a child’s routine to be able to teach the key words “flexible” and “patient”. These are pretty abstract terms that can mean a lot of things to a lot of people. Patience to one person it’s patience to another, same with flexibility. But teaching a child what they generally mean in a context that is relevant to them is priceless, and it sets you up for major success when life hands you lemons.

I like to throw this into the mix when it’s not likely to cause a ton of disruption and I can highly reinforce the key words. My son loves chicken nuggets and hot dogs about the same, so when he asks for hot dogs, I can say “Hmm, not today. We can have chicken nuggets though”. He’s not likely to protest, because he also loves chicken nuggets. I can then say “WOW thank you for being so flexible! That is such a great way to be”. Then I can slowly program more substantial changes and reinforce my son tolerating them, or even being excited about them! The point is I want to teach up the concept and reinforce it before I require it. It’s a lot easier to handle a tornado when you’ve practiced the safety protocols. The time of a tornado isn’t the ideal time to learn. It’s the same with flexibility and patience. We need to teach those in a time of non-crisis to strengthen them for when crisis is happening.

Social stories aren’t data-driven, but I use them all the time and I like the purpose that they serve. A social story is a short story (typically homemade) that describes a situation with pictures so the child can prepare for it. I use it for trips to the dentist, new rules being put into place, family vacations, or changes in routine that are substantial. I use as many real life pictures as possible. If I’m preparing a child for the dentist, I try to get pictures of the actual office they’re going to, pictures of the staff they may see, pictures of the tools they might use, and give a brief explanation of how the trip is going to go in the form of a story. My son loves it when his picture is in the story too. I like doing this with big concepts such as flexibility, and including pictures of times that I know flexibility will be required.

I might use pictures of our favorite playground when it’s raining, and explaining that flexibility means that I know I can’t play on it if it’s raining, even if it was my plan to do so. I like using these visual tools before the child has to use the skills, then pulling them out again when the skills are needed. If it’s a day we planned to go to the playground, and it’s raining, and my son gets upset, I’ll pull out the social story and say “remember, this is one of those times we read about where we need to try and be flexible”, then highly reinforce picking another activity.

If there’s one thing COVID has taught us, it’s that our sense of normal can change daily. This has been a tough concept for our kiddos on the spectrum, because consistency is so important. That makes it even more important for us to teach how to be okay when consistency isn’t possible. We want our kids not just to learn how to thrive with support, but also learn how to thrive when the supports aren’t available We want to teach such an important skill in a loving, nurturing and caring environment before it’s needed.